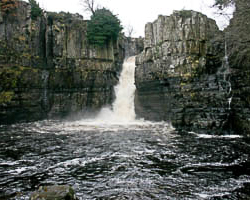 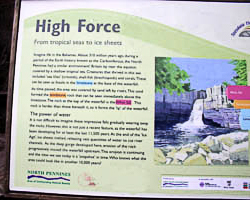 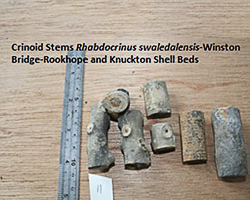 The geology of Northern England is quite complex, however, there are three aspects of interest to the Field Club. The first of these is the Whin Sill. This is a quartz dolerite rock that was intruded into the limestone of Upper Teasdale as a hot magma about 295 m. years ago. In Teesdale, it altered the limestone into what is known to geologists as saccharoidal marble and to biologists as sugar limestone. Wide areas of sugar limestone soils have been produced on Cronkley and Widdybank Fells. These soils bear a relict flora which has brought botanists to these fells for many years. The Whin Sill has also had an effect on the river Tees, forming the magnificent High Force waterfall and downstream Low Force falls. Beyond our area, the Whin Sill appears further north. Hadrians Wall is built on outcrops of the sill and appears again as the Farne Islands, another special place.

Study of Jurassic fossils flora of yorkshire. These ferns lived during the carboniferous period 360 to 300 millions years ago. The Whitby and south of Scarborough were the most important localities where these fern fossils have been found.

Now extinct, these plants had foliage closely resembling that of modern ferns but reproduced by means of seeds rather than spores as modern fern do today.

Alethopteris was one of the first plants to have seeds. Alethopteris had tongue-shaped, decurrent pinnules. venation was pinnate with sunken midvein and fronds were bifurcated.