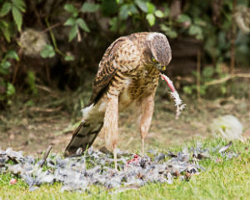 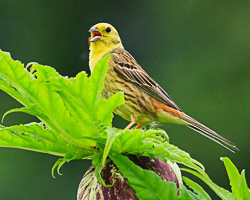 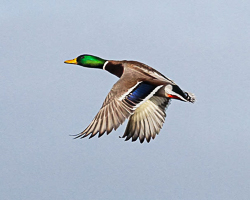 The main aim of the section is to support bird life in the area.

BIRDS ALONG THE RIVER TEES

The River Tees rises on the slopes of Cross Fell, at 893 metres (2930ft) the highest point in the Pennines. It flows through high moorland and deep gorges with high waterfalls and many rapids to enter upland grazing land and lowland arable farms passing by Darlington to its mouth at industrial Teesside.

All along its course the Tees and its surrounding banks and countryside is a wintering ground and breeding ground for a very wide variety of birds, some rarely found in other parts of the country and is a wonderful area for bird watching at any level.

Upper Teesdale moors are a summer breeding ground for Black and Red Grouse, Ring Ouzel, Curlew, Golden Plover, Lapwing, Common Snipe, Oyster Catcher, Redshank, Common Sandpiper, Black Headed Gull, Skylark and Meadow Pipit all of which can easily be seen on walks over the moors. The river and its banks are home to Dipper, Mallard and the occasional Kingfisher. Teal and Widgeon are beginning to breed around reservoirs on the Tees and its tributaries.

Birds of prey are rarely seen, but Merlins, Short Eared Owls, Buzzards and even Peregrines have been known to breed. Ravens and Ospreys have been recorded as flying over in migration season.

Lower down the Dale, Warblers and Finches breed in the woods, with Blackbird, Song Thrush, Mistle Thrush, Redstart and Woodpecker species.  Goosanders are now breeding on the banks and seem to be increasing while Pied and Grey Wagtails can be seen foraging among the rocks in the river and its tributaries.. Kestrels and Sparrow Hawks are the commonest birds of prey, but Buzzards, Tawny and Barn Owls are regularly seen and breed in the area.

The lowland reaches have breeding Kingfishers, and Sand Martins in the banks while Tree Creepers, Nuthatches and Yellow Wagtails breed in the woods and meadows along the riverbanks.

The Tees mouth area is famous for the variety of birds to be found alongside the activities of heavy industry. There are a number of well-managed nature reserves on both sides of the river mouth offering breeding sites for many species of freshwater birds and sea birds. Large colonies of Common Tern have established on inland waters such as RSPB Saltholme and other reserves. A Little Tern colony including good numbers of Ring Plover flourishes on the protected beach at Crimdon Dene and there is another small colony at Teesmouth.  Avocets breed on some managed lagoons and occasionally remain through the winter.

In winter the Tees mouth area is a feeding ground for flocks of Twite, Snow Bunting, Redwing and Fieldfare. Winter waders include flocks of Godwit, Curlew, Golden Plover, Lapwing and various Goose species. Over wintering ducks such as Pintail, Wigeon, Teal, Golden Eye and Shelduck can be seen on the many man-made lakes and pools in the area.

The mix of sandy and rocky shores in the area offers a winter home to many species of wader and sea duck. Common Scoter, Eider Duck and Divers occur off the coast and small groups of Turnstone, Purple Sandpiper, Sanderling, Oyster Catcher and Dunlin frequent the tide line. Many species of northern breeding gull can be spotted along the coast in winter while Skuas and Gannets can be seen out to sea.

It is rightly said of Tees Mouth that any kind of bird can turn up at any time of year and the long list of species recorded there is testimony to this. A similar claim may easily be made for the whole of Teesdale.