A small convoy of cars left Abbey Road on time, heading towards Weardale and first stop at the Dales Centre in Stanhope. Then on to Westgate to meet Susan and swell the group to 9. Different weather forecasts were predicting sun or rain, and in the end we had both extremes, so both apps worked!

The small village of Westgate, as the name suggests, was the entry to something.. originally the great hunting park of the Medieval Prince Bishops. And Eastgate .. well you can work that one out. Our walk is very well described in the North Pennines Area of Outstanding Natural Beauty (NPAONB) booklet available in hard copy or online at

Essentially we were following a three mile walk, mostly off road and along the stream that cuts through Slitt Wood. The final part is on road to see West Rigg and complete this amazing geotrail.

We started with geology, a great slab of limestone (Scar Limestone) whose resistance created a small waterfall that we crossed on a wooden bridge. The sandwich layer of limestone, sandstone and mudstone here, a ‘cyclothem’, is repeated up through Slitt Wood, leaving a walk along a series of low waterfalls. A great place to look for Dipper and sure enough, there was one. Alison quickly spotted a Treecreeper. Grey Wagtail, Pied Wagtail and Long-tailed Tit were seen. Brian went on to record a total of 22 species seen or heard.

Time for Sue to unload her Lichen guides and start to list her many finds that included Usnea subfloridana,Verrucaria muralis, Evernia prunastri (pollution tolerant). Lichens are good indicators of air quality and that of soil, so it was good to find so many and the latter species in particular. Ringlet, Large White and Meadow Brown butterfly were on the wing during the day.

We passed a former school and chapel, then a private house that provided entry into the wood. Common Whitebeam, Oak, Birch, Hazel, Rowan, Alder and Wytch Elm made up the wood and started Mary’s list. Betony was in full bloom and stunning. Less spectacular, but equally of interest, were Quaking Grass, Remote Sedge, Wood Rush, Maidenhair Spleenwort and Woundwort. Male Fern and Broad Buckler Fern were growing on the precipitous low cliffs where sandstone overburdened shale, and we picked out the fossilised ripples in sandstone on the stream bed. Such amazing detail from so long ago reminded us that actually we were walking up a geological timeframe dating back some 350 million years.

Soon we reached the remains of several lead mines that made Slitt Wood a very busy place in the 19th century. and a very polluted one too. The bulwalks of the Bouseteams are most impressive, but the adjacent remains of the lead ore washing floor less so. Well, look again! On the very thin soil, heavily contaminated still with highly toxic metal deposits, is a curious habitat – calaminerian grassland. Here, and along the other washing areas, grow some very special plants that tolerate such difficult conditions, and so have a competitive edge on other species. The delicate white flowers of Spring Sandwort were discovered. This is a plant that collects the heavy metals and moves to parts that drop off, effectively cleansing it. We also found Mountain Pansy that benefits from its association with fungi which sequester the metal ions. The remains of building around the former wheel shaft made for useful lunch seating.

Suitably refreshed we continued up among the mine workings, finding different plants in former low reservoir areas – Bottle Sedge, Glaucous Sedge, Butterwort, Watercress and Large Bittercress were among many other plants.

Susan was keen for us to search for minerals, with UV torches to hand. We fingered the spoil heaps and quickly came up with pieces of quartz that shone blue in the torchlight. There was so much to see, including fossils and a specimen found earlier, a splendid slab of Frosterley Marble. Two openings into mine adits, and water runs to drain the mines were examined. Then a Wheatear was seen on a wall, and as folk tried to get onto it, a small family was admired.

Time to walk on and upwards, but not too demanding. A track led to a more level one at a height where we could make out the line of the railway used to take out lead ore and reservoir used to feed the water wheel below in dry weather. Meadow Pipits were on the walls and abandoned buildings, Lapwing, Oystercatcher and swallows flying over us.

Shortly after reaching a metalled road we approached West Rigg and stopped to admire the narrow vertical slab of rock that is the Slitt Vein, a crack in the cyclothem that remains full of minerals that miners failed to extract. To either side, rock was removed for its iron ore content, leaving the vein exposed.

The rest of the walk down to the village was coloured by more stands of Betony and Northern Marsh Orchid, the latter gone over. Tea and cake back in Stanhope were enjoyed, both in the rain and inside. We’d had a great day in a place that is well worth visiting gain. Thank you for great company, great enthusiasm, expertise and recording.

Common lichen found on twigs this is a foliose lichen (leaf like) in the family Parmeliaceace and it is very tolerant of pollution. Lots of this in the area. 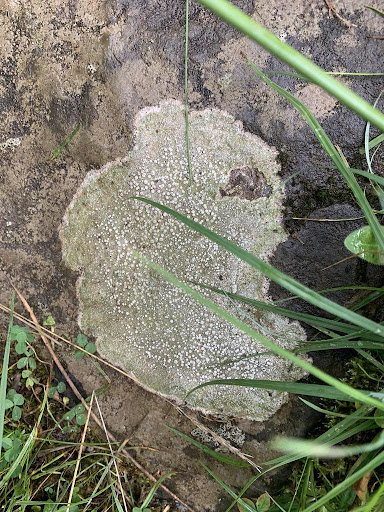 Grey or greeny-grey, powdery, crustose lichen. Typically has a ragged edge to the thallus due to mycelia growing outwards. It grows on dry surfaces of rocks or buildings.